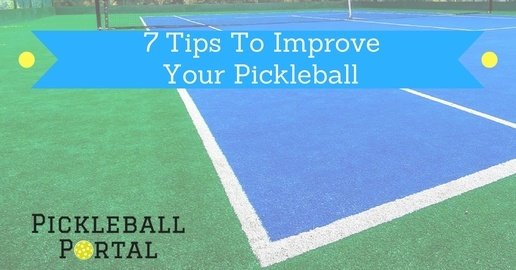 Next time you are out playing pickleball – STOP and analyze your body position.  Are you flat-footed? Is your paddle at your side? Are your feet positioned so you can quickly move to reach the next shot?

It’s easy to relax between shots or before the ball is served and fall back into a lazy position where you’ll be caught off guard.  It’s important to always be ready for the next shot.

There is some debate about how to define the best position.  After you’re done with these 7 tips, head over to our “Pickleball Ready Position“ to see 3 short videos from top pros, each giving their own helpful advice on how to get in position.

Experts give slightly different recommendations depending on your position on the court (at the non-volley line vs. mid-court or baseline) or what the best angle is to hold the paddle’s leading edge to favor backhand or forehand return…

As a beginner,  don’t confuse yourself too much with all these subtle details, just make sure you are in a position where you can easily return the next shot.

1)  Always Be In Ready Position

At this point of your game, work on training yourself to the point where this becomes an automatic reflex. Before every serve and after every shot you or your partner makes, get back into ready position and be prepared for your next shot. There really is no way to know if your opponent is going to fire back a smash or a carefully placed dink or if they’ll hit to your forehand or backhand so a neutral or continental grip is best.

2) Learn How To Dink Early On

Dink Shot: In Pickleball: a soft, short drop shot that originates from near the non-volley line, goes over the net, and then drops into the opposing non-volley zone. It’s similar to a short drop shot at the net in tennis. The dink is a key part of the slow game in pickleball.

When many beginner players start to play pickleball,  they first learn to hit longer shots to get used to the paddle and learn the basic strokes. But many stay back at the baseline and rely on the power game.

It’s not until much later do they evolve into an all-around player combining power with a strategic soft game. Some players are also understandably intimidated by approaching the non-volley zone. This is a HUGE disadvantage against any experienced player that knows how to dink.

The soft game can easily neutralize the power player even if they have a stronger pickleball shot than you.  A well-placed dink can set off a long soft volley which forces the other team to play the soft game where strategy and touch usually win overpower. Many times you can force errors on these players since they tend to return the dink hard.

The power hitter will either return the shot into the net or send it flying over and out of bounds giving you the point. The soft game is one of patience – and many “bangers” just aren’t patient enough, if you continue the volley with soft dinks eventually they won’t be able to resist the temptation to try to smash it past you and more often than not those hard shots end up as errors.

Dink Early and Dink Often: My advice is to learn to dink as soon as possible and practice it regularly. Dinking is a key skill to take your game to the next level. It takes a lot of patience to set up the winning shot.

Here’s a great video on how to improve your dink shot:

Be patient with your slow game and resist the temptation to smash the ball. Bend your knees and keep the leading edge of your paddle at about 45° angle to the net. Keep your elbow and wrist stable and swing from the shoulder, not the wrist. Follow through and then immediately get the paddle back in the ready position and be prepared to return any shot- it could be a dink or smash.

What is the 3rd shot in Pickleball?

The 3rd shot of any point which is also the serving team’s second shot of the point.

The 3rd shot on every pickleball point can be critical and often sets the pace for the entire point. It’s also can be a great advantage for the serving team to transition to the net and take control of the slow game. To set up the third shot, get in the ready position with a neutral continental grip, and be ready for either forehand or backhand return.

Don’t try to force your 3rd shot!   Many players try to hit the third shot too hard and end up losing the point.  The goal of the third shot is to allow you to transition to the net.  Ideally, the shot’s arc will peak on your side of the court then dropping over the net into the opposing kitchen.  Always try to lift the shot to create a good arc.

This is a hard shot to perfect and takes practice so make sure it’s part of your regular training routine. A good drill is to practice with a partner. Position yourself on the baseline and your partner at the non-volley zone. Practice hitting the lob to them several times then switch positions. This way you each practice setting up the 3rd shot and returning it from the non-volley line.

If you are looking to take your drop shot skills to the next level, the folks over at Quick Pickle have teamed up with pickleball pro, Daniel Moore, to create an online video course called “Drop Shot Domination” that is specifically designed to teach you the strategies behind this shot, it also includes a free bonus course called “Dinking to Gold”.

This combo is a great option for a self-paced course taught by a professional pickleball player that covers both the drop and the dink. Other than paying for private 1-1 classes, I haven’t seen anything this useful for improving your pickleball skills.

Final Tip: Don’t just automatically approach the non-volley zone on every third shot.  It’s easy to get in the habit of rushing to the net on every 3rd shot but the conditions also have to be right. You need to learn to read the other team if they have you beat and are in position at the net you may get caught out of position if you immediately rush the net and get set up for an easy lob over your head.  Stay back and try to set up the approach on the next shot. Patience will win points.

Here is a great drill from the folks at “Pickleball 411” to improve your 3rd shot strategy:

4) Sync Movement With Your Partner

One of the easiest ways to take advantage of your opponent is to find the gaps and spaces on their side of the court.  One player positioned at the net and the other at the baseline creates a big cross-court target for you to place your shot.  Whenever they are spread out you’ll see more game-winning opportunities. Don’t let this happen on your side of the court! To prevent this, imagine there is an 8-10 foot length of rope connecting you and your partner at the waist. Your goal is to move in sync so that the rope is always taut, maintaining that distance.  If your partner moves to the net so do you.

If they move back, you move back.  Right-Right, Left-Left. The goal is to maintain enough space between each other to not interfere with each other’s stroke and cover the court’s width but stay in sync to avoid those dreaded gaps that any good opponent will capitalize on.

5) Communicate With Your Partner

Just as you need to move in sync, you also need to talk to each other!  No matter how good you both are you need to communicate with each other. In any doubles racket sport, communication is one of the most important yet under-practiced skills.

If you are new to pickleball you may be wanting to try out lots of different shots you’ve seen other more advanced players use on the court.  Or maybe shots that friends have taught you or that you’ve even learned in private pickleball lessons. But mixing all these shots randomly during a game can be a quick way to lose a lot of points.

Your strongest offensive position in pickleball is at the net-when both you and your partner are at the “no-volley” line. Both of you are evenly set up with feet just behind the line, perfect positioning to return the volley (without letting the ball hit the ground) and play an extended slow game.  You should be just behind the line, in ready position with feet set to quickly pivot from side to side.

Many newcomers to pickleball get intimidated in this position. I get it, I remember that feeling. It can be stressful, especially as a new player since the ball is coming right back at you with very little time to react. It’s easy to slowly (or not so slowly) drift back and end up in midcourt.  This area (halfway between no-volley line and baseline)  is called “No-Man’s Land”  both in tennis and pickleball for a good reason.

You are at a huge disadvantage here since the opposing team has more time to react to your shots and you are opening up more angles for them to hit at.  You’ve also created a gap in front and behind you so they can get you with a well-placed dink or lob. Easier yet, they can just nail the ball at your feet (if you move up they don’t have this option since the net takes away that angle).

So, while you may get a false sense of comfort playing at mid-court it is actually the weakest spot to be in. Move up to the no-volley line.  If you have to regroup move back to the baseline with your partner and try to drive them back –but whatever you do: Stay Out Of “No Man’s Land”!

#1 Tip To Improve Your Serve

3 Mistakes to Avoid when Volleying