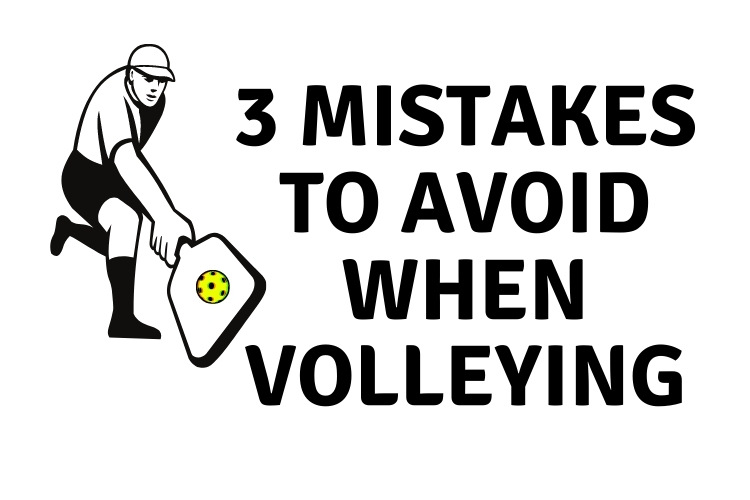 Three great tips from the people over at Pickleball Channel and their Pickleball 411 video series.
This video gives three good tips on improving your pickleball volley technique. Good footwork and position on the court are key. Keeping your feet moving, controlling the low shots and standing your ground at the kitchen line.

Hitting the ball too hard when it comes in low. Forcing low angled shots will oftentimes end in an unforced error, ending up in the net or popping it up high. The high angled shot will likely fly over your opponent’s head and out of bounds or turn into a high shot which can be reached by players on the other side and they’ll smash it away for a winning point.

For low shots, don’t force power if you don’t have the advantage. Often times it’s to your strategic advantage to hit a soft cross-court dink over the net to the opposite player…to their backhand- don’t hit a weak dink shot to the middle as that sets them up for a strong forehand put-away.

2) Letting the ball get too close to your body.

Allowing the ball to get too close to your body and losing reach for a proper swing.

This most often happens because you are not moving your feet. Footwork is key, don’t let yourself get caught off guard standing flat-footed. Move, move, move. You have to constantly adjust to the game and be light on your toes. Practice it while you warm-up before each game-quick lateral steps-  learning good footwork is kind of like dancing…you have to put in a little work to get good at it but then it just comes naturally.

If you are a player crossing over from tennis you should be able to do this already. It’s the same kind of quick lateral footwork most players use when getting ready to return a serve. Light and soft on your toes, constantly adjusting and ready.

If you learn this technique you can quickly adjust to the incoming shot with a lateral step or two. You have to be able to get out of the way and give yourself enough room to take a natural swing at the ball, otherwise, you’ll force yourself into unnatural positions, putting to much emphasis on your wrist.

Rather than put stress on your wrist, you want to swing from your shoulder- and to do that you need to be about an arm’s length away from the pickleball. it’s better to be a little too far away and have to lean into the shot than trying to return a ball that’s right up against your body- contorting your wrist and elbow to scoop the shot out.

3) Allowing yourself to get pushed off the kitchen

Allowing yourself to get pushed off the kitchen and ended too far back in the mid-court. Many players end up slowly drifting back (or not so slowly) and end up in the dreaded “no man’s land”. Nothing good is going to come from being in that position. Don’t get a false sense of security. Yes, backing off the line does give you an extra split second of response time BUT you are opening up a big gap in front of you. Other teams can capitalize on this by hitting the ball at your feet.  Learn to identify this gap- both on your side and the opposite side of the pickleball net.

When you see this gap on your side- move up! Toes to the line!  When you see that gap on the opponents’ side (when they have drifted back into the middle of the court) smash away and aim right at their feet.

Check out the video for great examples of how to improve your volley skills.

For more beginner advice, see our Top Tip For Improving Your Pickleball Serve here, and Our Top 7 Pickleball Tips HERE

3 thoughts on “3 Mistakes To Avoid When Volleying: Video From Pickleball 411”