One of our readers recently contacted us asking for some good tips for singles pickleball. This experienced doubles player was entering his first singles tournament and looking for some quick tips. We love hearing from our readers so please let us know in the comments if you find this useful and if there are any other topics you’d like us to cover.

First of all, singles is a much more physically demanding game. You’re covering twice the amount of court by yourself so it will test your fitness level much more than doubles. While you may be able to outplay your opponents in doubles by playing smarter then they do, it will be hard to beat someone at singles if they are in much better shape and you are huffing & puffing and unable to cover the width of the court on your own.

Depending on your current level of fitness and seriousness about improving at singles, you may want to start adding some additional conditioning training to your exercise routine. To practice lateral movement and quick starts/stops, drills like “Suicide Sprints” (terrible name but great workout) where you run back and forth -stopping to touch each line on court and changing direction each time-or even just practice sprinting the full length of the court- can really help your stamina during singles matches.

If you’re not up for that amount of punishment, just adding cardio sessions (treadmill or elliptical machine if you’re looking for less impact on your joints) can help up your singles game and keep you from burning out during your singles matches.  I’m not trying to scare you away from playing singles but it is important to have realistic expectations based on your current fitness and that of your opponent.

In doubles pickleball, you may be able to get away with just getting your serve over the net and in, but to win in singles you really need to be able to use your serve as an offensive weapon. In singles, you need to serve hard and deep!

Ideally hit it hard and aim to your opponent’s weak side, if that’s too much to ask (based on your current serving skill level) then hit it hard, deep and down the middle – it’s better to hit it hard and get it in down the middle rather than letting up on your serve while trying to hit the corner of the service box. A stronger, deep serve wins over perfect placement.

In singles the hard serve is key, otherwise, your opponent can easily hit a strong return and you are immediately put on the defensive. Serve from close to the middle line and immediately get in “ready position” after the hitting your serve-  this gives you more mobility to get to a return to your weak side.

If you are new to singles, it’s not really the time to try to be fancy or use a lot of finesse. Singles is dominated by fast play where power and speed usually win over a slow controlled game. You want to try to keep your opponent moving by hitting crosscourt shots. If you let up on your opponent you’ll give them time to hit well placed hard passing shots by you. Don’t give them time to settle into position and hit the gaps easily.

Pick your time to move to the net wisely- you need to be aggressive when you decide to go for it. Don’t absentmindedly just run to the net immediately after your return – you need to have just hit a good, deep return if you are going to go on offense and attack the net. If you follow your weak volley to the net your opponent can easily pass you on either side if you give them ample time to place their shot.

Tall players with large “wingspan” can get away with a little more at the net because they have the reach advantage but if you are smaller with shorter reach you really have to choose your approach to the net wisely in singles and only move up when you have the upper hand (following a hard, deep shot).

As we mentioned, you want to wait to move to the net until you are ready because your opponent can hit a winning “passing shot”. On the contrary, you can use this same strategy against them.  When they approach the net, if they are in a weak position you can hit a winning drive past them.

To do this you’ll need to get good at using the full court dimensions- and have the ability to hit a drive down the line- out of reach of their paddle. This means you’ll need to practice hitting shots just inside the lines. Practice hitting straight drives from the baseline, trying to keep the ball within 12” of the line. This is a good drill when you are on your own or warming up with a partner.

In doubles, players often take advantage of the “3rd shot drop”.  As we’ve said here, singles is a quicker power game. Rather than always relying on the drop shot so much, using the hard passing drive on your third shot can be a way to pick up quick points in singles.

Don’t get me wrong, the drop shot is still a very important skill to master. Speaking of the drop shot, the folks over at Quick Pickle have teamed up with pickleball pro, Daniel Moore, to create an online video course called “Drop Shot Domination” that is specifically designed to teach you the strategies behind this shot, it also includes a free bonus course called “Dinking to Gold”.

This combo is a great option for a self-paced course taught by a professional pickleball player that covers both the drop and the dink. Other than paying for private 1-1 classes, I haven’t seen anything this useful for improving your pickleball skills.

The soft game. It’s not all hard and fast. While singles is known for speed and power, advanced players know how and when to downshift gears and slow things down to use the slower, well-placed shots to their advantage. The occasional short return, deep lob or corner shot can keep your opponent on their toes and guessing what your next move will be. If you always play the fast game it can become predictable.

Here is a great break down by Mark R. of Third Shot Sports showing how pro players are able to interpret the situation and use control shots to win points in singles play.

Players who regularly alternate between singles and doubles often have a paddle for each style of play. Many competitive players can be seen at tournaments using a mid-weight paddle for doubles but then they switch to a heavier or elongated paddle for singles matches.

I’m not saying you need to go out and buy a new paddle for your first try at singles but if you get into it and are going to be playing singles regularly and competing then you may eventually want a dedicated paddle that works well with for singles.

In general, for singles, you want some extra power and possibly a slightly longer paddle for extra reach. As we’ve said, singles is a game of hard drives, deep serves and powerful returns, so you want a paddle with a bit of extra weight and a good boost of power that allows you to take long deep strokes.

Elongated or Blade style pickleball paddles (see our full comparison and reviews) are also popular among singles players since they give you a couple inches of extra reach (up to 17” as allowed by the USAPA). 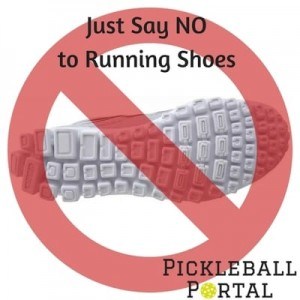 Footwear: In my opinion, good shoes are the #1 priority for pickleball gear and more important than your paddle. I’ve repeated this many times on our blog- this goes for pickleball in general but especially for singles– because of all the starts and stops and quick lateral movement- you really need to make sure you have proper shoes for pickleball (see our buying guide) to prevent injury.

Unfortunately, some pickleball players have been told just to wear “athletic shoes” or “sneakers”

The problem with running shoes is that while they feel comfortable, they are totally inappropriate for the lateral movement used in pickleball. You want to wear good court shoes with flat soles – that do not have the deep lugs or treads that running or trails shoes have ( these can catch as you move sideways and cause you to fall, twist an ankle or worse).

Another Way to Learn: Watch the Pros Play Singles:

Another great learning tool can be to watch professional players play singles. Here is the Men’s Singles PRO gold medal match at the 2017 Minto US Open Pickleball Championships between Ben Johns and Kyle Yates. Take a look at their serving, the deep shots and how they move on the court. You’ll also probably notice the general lack of a slow, dinking game that is typical in doubles. Lots of powerful shots and quick points.

Overall, singles pickleball is a more offensive game than doubles pickleball. It will test your fitness level and keep you on the run more than doubles. You’ll need to be able to hit your serves hard and deep and learn to go for quick wins rather than relying too heavily on your short game. A key skill to learn is a hard passing shot out of reach of your opponent which means you have to get used to using the full width of the court- both cross-court shots and line drives.

Singles can be a lot of fun, will keep you in shape and ultimately will most likely make you a stronger doubles player.  Adding power to your shots and keeping your opponent on their toes is key to winning at singles.

Please let us know in the comments below if this helped at all or if you have anything to add. If there are any other tips or guides you’d like us to add to our site, please let us know.

3 thoughts on “Singles Pickleball Strategies | Tips For Beginner To Advanced”