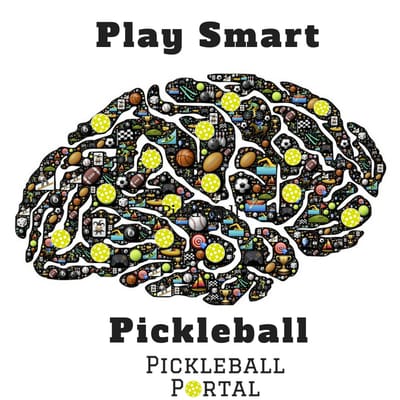 Strategy: a plan of action designed to achieve a long-term or overall aim.

In our case: having a specific plan for winning more games on the pickleball court.

While this may seem too obvious and simple, it’s surprising how many players don’t actually stop to think about how they are going to improve their game and play better together with their partner. Many just go out on the court and “give it their best effort”.

The problem is, they often play out of sync. One may be hitting it deep and pushing the opponent back while the other is trying soft lob shots on almost every point…the key to playing stronger as a pair is at least having a similar overall plan and style of play.

What specific steps are you and your partner going to take to work together to play better pickleball?

Unlike singles pickleball (click to see tips), where the entire game plan is all up to you, in doubles, it’s critical for both of you to be on the same page.

The following tips can easily be put into practice at your next match. It just takes some planning and agreement between both players on when and how you are going to move around the court and basic shot selection based on both of your strengths.

The team at the net has a huge advantage over the team in the backcourt so keep your opponent in back as long as possible. Hit deep shots into their back-court. Try to keep them at the baseline and prevent them from advancing to the net.

As soon as you have an opportunity to move towards the net, move up to the net quickly with your partner to take the upper hand on the point. The team that dominates the net is generally the team that will win the point.

This sounds obvious, but make sure your serve gets inside the service box. Concentrate on getting the ball over the net rather than trying to ace it. Practice this on your own time outside of competitive play.

You need to be able to consistently serve the ball. You only get one serve attempt in pickleball so you need to minimize service faults.

Aim for the center of the service box. It’s the most consistent and low-risk serve and it’s your best chance at getting the serve in bounds. Any serve that makes it in, even if it’s not the best or fastest serve, is better than a fault.

As you practice you can learn to serve harder, faster and add spin- but to start just get it in!

Click here to see the #1 Tip To Instantly Improve Your Pickleball Serve!

Avoid return of serve faults. Again, this sounds too simple but that is the idea. Keep it simple, avoid unforced errors and keep pushing your opponents back. Aim for the middle of the service area.

Get the return over the net-deeper, longer shots are better, keep your opponents back at their baseline.

When you are returning the serve, your partner should be at at the non-volley (kitchen) with their toes just a few inches back from the line and in “ready position” (click here to see our full article on positioning)

Beginner Tip: Do not attempt a short drop shot in games unless you have mastered the shot. Trying a soft drop shot will more often put the other team at the advantage.  You’ll pay dearly for a weakly played drop shot. The drop shot is a fundamental shot in pickleball that you need to work on and put in hours of practice when you are not playing competitively. There are lots of practice drills you can do for the drop shot to improve. Once you’re an advanced player with a killer drop shot this can be a powerful weapon in your arsenal.

Immediately after the return of serve –charge up to the No Volley Zone (NVZ) and be ready for next shot. Don’t hang back on defense, you need to try to take control of the net before your opponents do.

Don’t leave a hole in the middle between you and your teammate, that gap is an easy target for your opponents.  Move with your partner from left to right. One useful tool I find is to imagine you have an 8-foot piece of rope connecting you to your partner.  Move in sync to cover all of the courts while maintaining the distance between the two of you, constantly re-position in close coordination with your partner.

Rather than running around the court and lunging to cover the gaps, save your energy by covering the court strategically between you and your partner. Eliminate the holes and easy targets for your opponent to capitalize.

Running and sweating may make it seem that you are playing harder or better than your opponents but sometimes slowing down to think, anticipating where the ball will go and making it harder for the other team to find opportunities can be much more successful than playing hard. That’s the idea behind playing smart.

This is an essential strategy as we age also. I can’t move as fast as I did 20 years ago –  but a slower player can outplay a younger, stronger and faster player by playing smarter on the court.

“Unlike most sports, the higher the skill level the game seems to slow down instead of speed up. It’s more about placement and spin rather than power and speed.”

Mine, Yours, “NO”  (if the ball is going out of bounds). Good teams talk to each other out loud throughout the entire game. One of the winning strategies of professional doubles pickleball players (just like pro tennis players) is clear communication.

Have you ever seen two partners stand and watch the ball pass them both right down the middle…?

They both just stand motionless thinking the other was going to hit the ball. This is just one of the common mistakes you see that can be avoided almost entirely by talking to your partner.

Talk to each other!  Clear statements said out loud throughout the match can prevent confusion and keep you working as a team.

Ideally, a drop shot into NVZ (“Kitchen”). Serve to opponents backhand. For beginners, if you can’t execute drop shot, hit low, hard and down the middle. Advance to the net if you can. If your opponents don’t make it to the NVZ – hit at their feet!

Unless they are standing right up to the kitchen line, you should see a gap at their feet, this is a perfect target, they’ll have a harder time returning balls hit at their feet.

Protect yourself from this same weakness by keeping your feet at the NVZ line, don’t give them the chance to hit at your feet.

Click Here For Simple Ways to Improve Your 3rd Shot

Take advantage if opponent is caught in “No Man’s Land”.  Again, hit at their feet whenever possible.

Hit at their backhand if possible. If your opponents are fast and at the net already-use your DINK. Let them commit an error, do not give them a smashable shot.

Keep your shots short and low so they can’t hit down…patience is key…resist hitting a high shot.

For a full look at more Pickleball Doubles Strategies check out this detailed video by Joe Baker with other very useful tips.  Keep it simple and follow this advice and you should quickly see your game improve!

If you like the video, you should check out Joe’s book: At the Line Pickleball: The Winning Doubles Pickleball Strategy.

We review the book, along with other top-selling pickleball books here that you may find useful to improve your game.

Half the battle is playing smarter than your opponent. Even if they are younger and in better shape than you, strategic play can outsmart fast and powerful players.

Hopefully, these tips will help you and your doubles partner play smarter on the court.

Other articles you may find useful:

#1 Tip To Improve Your Serve

3 Mistakes to Avoid when Volleying