What is the Double Bounce Rule in Pickleball?

Official Rule:
Two-Bounce Rule: After the ball is served, each side must make one groundstroke prior to volleying the ball.

(The wording in the newest version (2018) of the official pickleball rule book now refers to the rule as the “Two-Bounce Rule” rather than the “Double Bounce Rule”, scroll to the bottom if you really want all the specific wording).

It’s probably one of the the most common questions in pickleball, and one of the most important basic rules to understand as a beginner.

To explain the rule in further detail: for each point played in pickleball, each team must play their first shot off of the bounce. So on the serve, the receiving team must let the ball hit the ground. Then on the return, the serving team must let the return of the serve also bounce before hitting it. After the two bounces have occurred (once on either side of the net) the pickleball can then either be volleyed (hit directly in the air before it bounces) or played off the bounce.

Useful Definitions:
Groundstroke – Hitting the ball after one bounce
Volley – During a rally, hitting the ball while in the air, before the ball bounces.
Click here to see our full list of pickleball terms and definitions. 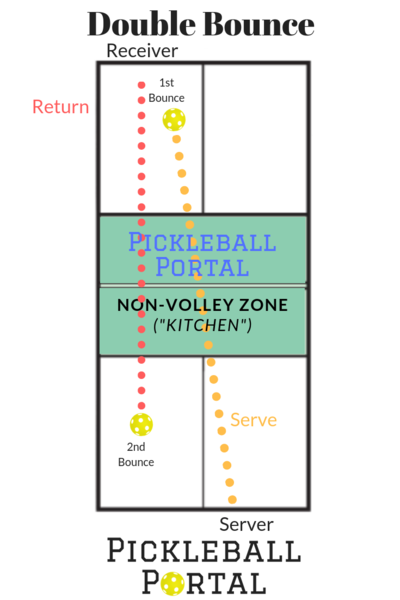 Here is a short 2 minute video with a good basic overview of pickleball with a clear example of the two bounce rule in practice:

The wording in the newest version (2018) of the official pickleball rule book now refers to the rule as the “Two-Bounce Rule” rather than the “Double Bounce Rule”. If you are interested in the specifics, here is the exact wording.

Two-Bounce Rule. After the ball is served, each side must make one groundstroke prior to volleying the ball.
Click to open PDF of the official updated rule book.

Old version:
Here is the wording in the 2014 version of the rulebook. The rule has not changed, just the wording from “Double Bounce” to “Two-Bounce”.
Two-Bounce Rule. After the ball is served, each side must make one groundstroke prior to volleying the ball.

In previous versions of the rule book it was called the “Double Bounce Rule” (see below for details).

Just getting started in Pickleball?  You might find these useful:

Double Bounce Rule. Following serve, each side must make at least one groundstroke, prior to volleying the ball (hitting it
before it has bounced).

4.H. Double Bounce Rule. The serve and the service return must be allowed to bounce before striking the ball. That is, each side must play a groundstroke on the first shot following the serve. After the initial groundstrokes have been made, play may include volleys.

Why change the the term?
This wording was mostly likely changed to help avoid confusion with a “Double Bounce” in pickleball.
3.A.6. Double Bounce – A ball that bounces more than once on one side before it is returned

Why does the Two-Bounce Rule exist in pickleball?

If the rule did not exist, pickleball points would most likely be very short and it would be a pretty frustrating game to play. If you imagine the game without the rule, the receiving side could wait for the serve at the kitchen line (NVZ). A high serve could be smashed midair back at the serving team. A soft serve could be dinked just over the net, forcing the serving team to sprint to the net from the baseline making it very difficult to return the shot.

If you are not convinced, next time you play – while you are warming up with the other team try playing a few points without the two bounce limitation. I think you’ll soon see that without the rule it would totally change the game and be a lot less fun.