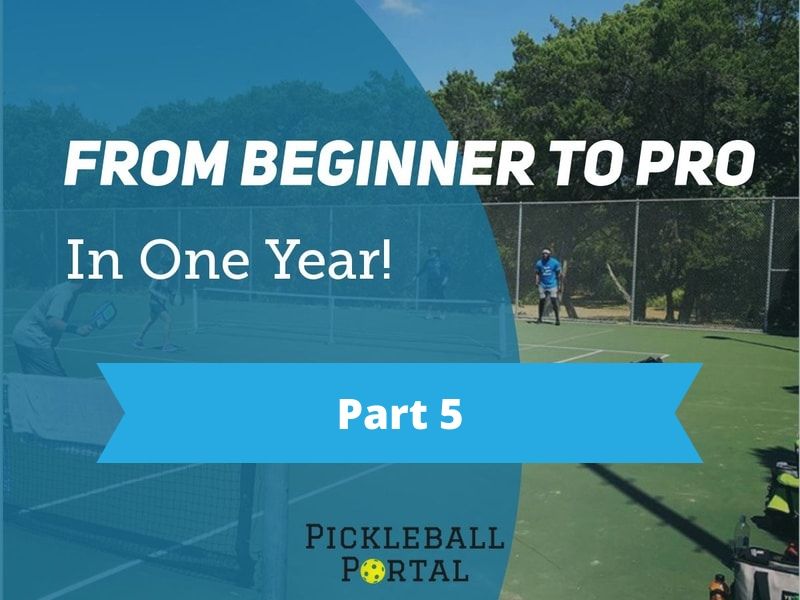 Well, what a crazy past couple of months.

I think it’s fair to say that no one saw this coming when I started this journey.

The California Open was the last pro tournament to be played March 6-8.

It seems like a lifetime ago at this point after being holed up in my Austin, TX apartment since March 13.

My hair was a disaster (until I masterfully chopped it off myself). I’ve been letting my facial hair turn into an ugly looking growth on my face. I don’t shower as often as I should, and I’m eating my face off.

On the fortunate side, my wife and I are healthy and staying home.

This has also been a good opportunity to rest and let the knee injury that I suffered at the California Open heal.

I was so excited for the California Open.

I knew my knee wasn’t doing well, but I guess I didn’t know how close it was to fully breaking down on me.

I arrived on a Wednesday and headed straight to some courts to drill with Dekel Bar and Shellton JeanBaptiste-Webster.

I felt okay in drilling doubles, but I was still subconsciously protecting it and not moving and pushing off with it much.

I played some practice singles points with Dekel because I hadn’t practiced singles really at all since Mesa because I was trying to let my knee heal.

It was tough because the knee didn’t feel great, but it wasn’t at the point of feeling like I couldn’t safely play on it. The pain wasn’t that bad, it just didn’t feel fully stable.

And never having dealt with sports injuries before, I didn’t have a good gauge on whether or not I should or shouldn’t play.

So, I played, of course.

And, of course, the first day of the tournament had to be singles.

We had an early 8am start for singles on Friday morning. I woke up about 6am and had a light continental breakfast at the hotel before going to the fitness room to get some stretching in.

Brian Horner, a former ATP Tour physio, gave me a handful of stretches to do when I met him in Arizona at the tournaments in February. I stretched for a bit and then headed to the courts to warm up with AJ Koller.

This was a first round singles match in the Pro division at the California Open in Fountain Valley, CA.

As you can see in the video by Pro Pickleball below, my left knee has a sleeve and KT tape on it. I had sprained my MCL a couple weeks prior, so I was trying to take as much precaution as possible.

Against Rafa (and in singles in general), my main strategy was to just hit as many forehands as possible by running around my backhand. With my knee hurting, I wasn’t able to move as much as I’d like, so I hit more backhands than usual.
Singles is nearly impossible if you’re not able to trust your legs.

In my second round match against Tyler, I got off to a quick start in the first game going up 7-0 and eventually 10-2. I was hitting a lot of winners and he was making more errors than he usually does.

He battled back to 10-10 and eventually took the game 16-14. I had plenty of chances to win that first game, but I felt like I played well considering my knee.

In the second game, he was up 6-2 before I pulled out. I came to the kitchen, did a split step and felt my knee give out. I stopped playing immediately and had to pull out of the rest of the tournament.

I didn’t know exactly what I did to it, nor did the trainer, but I ultimately would discover I tore my medial meniscus.

This was my third ever pickleball tournament and second tournament playing singles.

I feel like I am tracking and on pace of hitting my goal of being a top 15 player by the end of the year. The knee injury and the virus might delay it a bit if I’m not able to compete as much in 2020, but those are both out of my control at this point.

Moving forward, I’ll likely focus on doubles as I return from injury. I want to play this game for a long time at a high level and my future is definitely in doubles, not singles.
I might reconsider playing singles again down the road, but I’ll focus only on doubles in the short and medium term and until my knee comes back stronger than ever.

When I do play singles again, I’d like to continue working on hitting softer rolls and drops as my third shot rather than just trying to hit hard winners. I was going for winners more in the matches against Rafa and Tyler because I couldn’t rely on my legs with the injury.

I’m not saying there’s ever a good time to be injured, but if there was one, it would be now.
God obviously doesn’t think pickleball should be played without me (kidding!).

The injury occurred March 6, so we are approaching the eight week mark since it happened. I couldn’t put any weight on my knee the days after it happened.

Just over six weeks ago, I received platelet-rich plasma (PRP) injections in my knee.

I don’t know if any of you have ever done prolotherapy or received PRP injections, but I had no idea what it was until introduced to it by a friend.

To be able to inject your own plasma into your knee, you have to get your own blood drawn first.
Not a huge fan of needles, so I turn my head away and let them draw my blood for what feels like an hour.

I managed to not look the entire time until the nurse was leaving with two huge vials of my blood. How am I even still alive after losing that much blood?

I know some people faint.
I actually felt fine after having the blood drawn.

Now they take the blood and put it in some machine that separates the different parts of the blood.

Once they have the PRP separated, they inject it into the injured joint, ligament or tendon.
I read reviews that said you might feel some minor discomfort.
I felt way more than minor discomfort. It hurts. A lot.

And it hurt a lot for the next five days. It felt like if I were to try to bend my knee at all that my knee would explode into a million pieces. It felt like it had that much pressure built into it.

I almost felt like I was going backwards with healing because before the procedure my knee didn’t hurt anything like this.

After about five days, the pressure in the knee was nearly completely gone. The knee still hurt from the injury, but the pain started to dissipate more and more.

Two weeks after having the procedure, I was living without a brace and moving around pretty well and able to do some basic plyometric exercises to try to strengthen the muscles around the knee.

I bought a stationary bike on Amazon because we’re stuck at home with the whole quarantine thing. I’m able to ride the bike pain free. I couldn’t go to a high resistance at this point in the recovery, but I was able to pedal pain-free at a decent resistance and speed. It felt good to be strengthening my left leg again.
My left leg went nearly a month without being used at all, so the muscles went away pretty quickly. The stronger the muscles around my knee get, the more stable my knee feels.

At this point I’d try to do a little half squat sometimes to see where I was at, but that still caused a fair amount of pain. So, four weeks post-injury and two weeks post PRP, I was making progress, but not quite ready to jog or sidestep or anything like that.

I am super grateful for the progress I’ve made although I still have pain in my knee. I can walk, do squats, do single leg squats, side step and other exercises like that. I still have a bit too much uncomfortable pain if I try to jog with a normal stride.

When my heel strikes the ground first, that’s when I feel the pain in my left knee.

I’ve been able to get out to the courts and dink and hit drops. Today I actually played doubles for the first time. I kept my movement very controlled and didn’t go for balls that I felt would put me at risk.

I’m making sure I do a strong dynamic warmup with jogging, shuffling, high knees, butt kicks and squats.

I live in a high rise building in Austin, so I walk the stairs in my building to continue building strength in my legs. I feel like my left knee is getting much more stable.

If I could just get rid of that nagging pain when my heel hits! Alas, I’m super grateful for the progress.

Injuries make you really appreciate when you are healthy. Holding onto that perspective and being super grateful for my health and taking care of my body in a more intentional way is a great lesson I’m walking away with.

I don’t know how the knee will continue to unfold, but I’m hoping I’ll be able to get rid of the pain soon as I continue to strengthen my leg.

I’ve got no idea when tourneys will resume, so I feel very little pressure in rushing to get back on the court at full speed. Obviously, I want to play at full strength, but I’m not feeling any pressure to rush it.

It’s hard to imagine when tournament directors will feel that it’s safe enough to have people flying in from different parts of the country to a single tournament location. I’d be surprised if that happens this summer, but never say never.

Regardless, when I’m fully healed, I’m going to be training like there’s no tomorrow with my focus on doubles.

I still have all of the confidence in the world that I can hit my goal of being a top 15 doubles player with a full year of playing under my belt.

I feel like I was well on my way in singles to hitting top 10-15 without ever having really practiced singles. I’m excited to see what kind of damage I can do in doubles.

Without tournaments being played, I’m not going to post every two weeks, but I will provide an update every month at the beginning of the month.

Here’s to hoping I come to you with good health and good news on June 1!

Thanks so much for following and please let me know in the comments if there are certain things you’d like me to cover.