While the vast majority of our readers have no intention of becoming pro pickleball players, you still may be curious about who the pros are, how they started – and the paddles they play with.

Although you never know how obsessed you might get with this sport, one player documented his journey to becoming a pro player for us in 2020 – shortly after playing pickleball for the first time!   You may be wondering how what it takes to make it, how much they can earn, and what kind of equipment are they playing with?

Since we launched this website, we’ve seen the quality of paddles rise to a new level (with price tags to match). Five years ago many of the top paddles were selling in the $75 range, with only a few special edition models edging just over the $100 mark.

Since then, the use of premium materials including specialized cores made of high-end composites and carbon fiber or graphite paddle surfaces has become more common. Because of those factors, along with the increased number of competitive players looking for high-quality gear,  it’s now very common to see models over $100, with some of the high-end ones now topping $175 – a full hundred dollars more than just a few years ago. 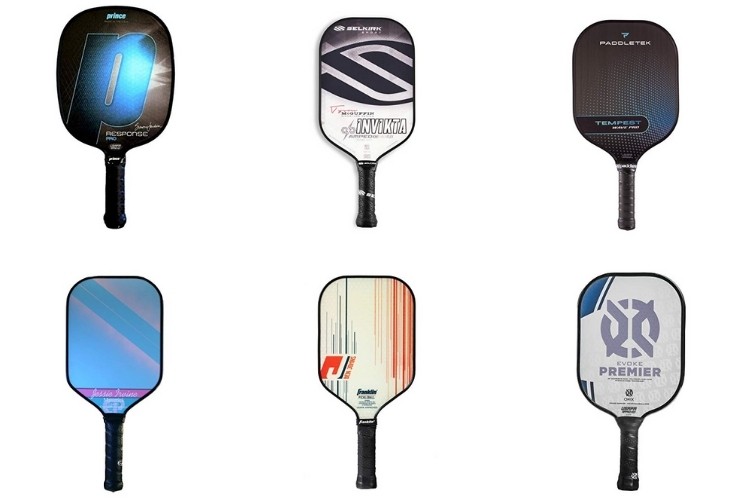 While those prices might seem crazy to someone using a beginner paddle – it’s worth noting that pro tennis players like Djokovic (Head Graphene 360 Speed Pro) and Nadal (Babolat AeroPro Drive Original) use rackets that are in the mid-S200 range and above (and the actual racket those players use is most like a pro-stock model – a more expensive customized reiteration of the one you can buy).

Another interesting trend is that pro pickleball players are working together with brands to come up with new paddles with weight, shape and balance that best suits their playing style, a couple of good examples of those are the Selkirk INVICTA -Signature Tyson McGuffin design or the Onix Evoke Premier that was co-designed by Pickleball National Champions Matt Wright and Lucy Kovalova (both mentioned below).

So, who are these pro players and what paddles do they use?  Below is a list of ten of the top men’s and women’s pro pickleball players in 2021. There are plenty of noteworthy pros out there,  this is just a partial list to get you started.

Ben Johns discovered pickleball in 2016 when he was still a student at the University of Maryland.  By 2017 he had won the gold medal in Men’s Pro Singles at the US Open and gold in Men’s Singles 19+ at the USAPA National Championships among others. From there he has continued to dominate on the court and as of 2021 was ranked the #1 Men’s player in Doubles, Singles, and Mixed Doubles!

In 2019 Johns signed an endorsement deal with Franklin and plays with a paddle that is aptly named: the Ben Johns Signature Paddle.

At the time of writing this Simone Jardim, from Brazil, is ranked #1 in the Professional Pickleball Association Standings. A former tennis player and coach during her tennis career, she is now one of the most widely known and respected ambassadors of the game.

Jardim started playing in 2015 and has since won over 90 medals, a two-time triple crown US Open Champion. She has also helped attract other top players to the sport – including Catherine Parenteau (see below) – one of the players she coached while at Michigan State University. She is the co-founder and co-director of Peak Performance Pickleball Academy offering private lessons and training camps.

She is sponsored by Prince Pickleball and plays with the Prince Response Pro, instantly recognizable for its unique rounded body shape. In February 2021, she announced she will be collaborating with Nike Pickleball Camps.

He is sponsored by Onix and plays with their Evoke Premier paddle.

Lucy Kovalova played tennis in her native country of Slovakia where she was a Junior Nation, later coming to the US to play tennis for four years at Wichita State. After college, she swapped her racket for a paddle and quickly rose to the top of the rankings.

Since winning the Women’s Triple Crown (Gold in Doubles,  Mixed Doubles and Women’s Singles) in 2018 she has gone on to win many medals and continues to be one of the top women playing in doubles and mixed doubles.

Lucy Kovalova is sponsored by Onix and plays with the same Evoke Premier paddle mentioned above – that she helped design for Onix along with Matt Wright.

Riley Newman is a native of  Whidbey Island, Washington – on Puget Sound – just north of Bainbridge Island where pickleball was invented.  A multi-sport athlete growing up and Division I tennis player he quickly adapted to pickleball when he started playing in 2017 and was soon playing competitively and winning medals and prize money. Newman plays uses a two-hand backhand, a more common tactic as more tennis players cross over to the sport. You can follow him here on Instagram.

He is sponsored by Selkirk and plays with the Amped Epic paddle, this paddle has a longer 5 ¼ handle that works well with his 2-handed backhand.

Irvine started playing tennis at the age of 10 and quickly became one of the top-ranked junior players eventually playing tennis at the pro level for a few years until she retired due to injury. From there she went on to POP Tennis and became one of the top players in the sport. Later moving on to pickleball where she has again risen in the ranks. She has taken Gold & Silver at the Tournament of Champions (TOC) and a USAPA Nationals Gold Medalist & Open Silver Medalist.  You can follow her here on Instagram.

She is sponsored by Engage Pickleball and was last seen playing with an Engage Elite Pro Maverick – the light blue and pink model pictured above -as you can see it has her signature at the base of the paddle.

Tyson McGuffin, originally from Lake Chelan, Washington was a competitive athlete from a young age and, like several others on this list, come from competitive tennis. While still playing tennis he discovered pickleball at a local YMCA and turned pro only six months after being introduced to the game.  He is one of the top two Men’s singles players in the sport. He plays with the paddle that bears his name: the Tyson McGuffin Signature Edition  – it averages 8.1 ounces for extra power on hard drives from the baseline to match Tyson’s powerful playing style that helps him dominate in singles. He is a also certified instructor.

With a competitive tennis background playing at the college level for Texas Tech, Irina Tereschenko quickly advanced in the rankings shortly after picking up a paddle. Rumor has it that Tereschenko’s pickleball career actually started on a dare from a friend to enter the 2015 Tournament of Champions with no pickleball experience.  Since then she has gone on to win more than 35 gold medals.  She often competes (and wins) in women’s pro doubles, often partnering with Lucy Kovalova.

She is sponsored by Paddletek and plays with the Bantam EX-L.  The responsive PolyCore is a good balance of power and performance that matches her all-around play.

Paul Olin played Division I tennis for the US Naval Academy in Annapolis and is now a retired Naval Aviator.  He is one of the top men’s players on the senior pro singles circuit playing against other top seniors such as Scott Moore.

He is sponsored by Gamma Pickleball the and the black version of the Gamma Legend is called the “Paul Olin Edition”.  has been seen promoting the Mizuno Wave Exceed Tour as his preferred pickleball shoe.

Catherine Parenteau came on the scene in 2015. She previously played college tennis at Michigan State University and was introduced to the sport by her coach at the time, Simone Jardim.

She is currently ranked in the top 5 for all three categories: Singles, Doubles and Mixed Doubles – where she’s often paired up in mixed doubles with Joey Farias (if you’re curious – he plays with the edgeless Gearbox GX6 Power (Joey Farias Signature Paddle).

Those are just ten of the most competitive players but as the sport continues to grow I’m sure we’ll see new names and rising stars. Whether they’ll be able to unseat these top players will remain to be seen.

As with any sport, the rankings are constantly in flux so this list may not match the current rankings when you are actually reading the article.

This sport is getting serious!  Some people who are getting started with pickleball may be surprised that find out that you can make money playing. In addition to the official Pickleball Association (governing body), there is a Professional Pickleball Association that organizes a pro circuit of pickleball tournaments, including three Grand Slam Tournaments that pay out $100K in prize money. Along with this growing trend comes more brand sponsorships and available prize money which is sure to attract more athletes to the sport.