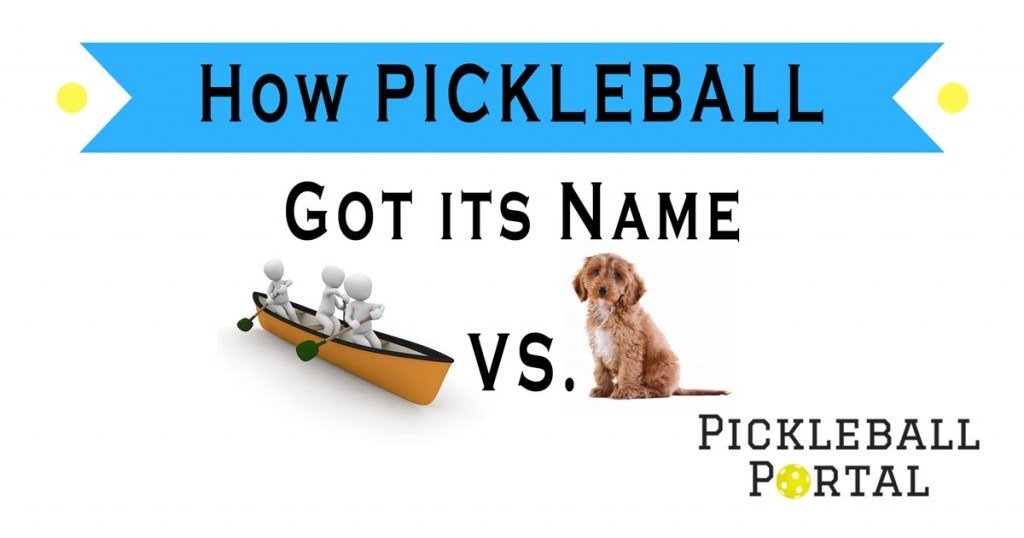 One of the most common questions we get from newcomers to the sport of pickleball is: Where did the name come from?

I have to admit- it is a pretty strange-sounding name for any sport.  When I tell people that I play “pickleball” a lot of people actually start laughing and think I am joking.

As the sport grows- it’s now played by over 2.5 million people in the US and has tournaments and leagues around the country – the name pickleball is becoming more common.

Many people, even if they haven’t tried it yet know about it and the sport is starting to be taken more seriously, but we still get asked about the name almost on a daily basis so we thought we’d clarify it for our readers.

So, let’s get to the bottom of the origin of the name.

Well, first of all, the confusing thing is that there are two (very different) official stories that have been repeated over the years by the founders of pickleball. Let’s call the two: the dog and the boat story. These two versions have each been documented in interviews and written records with each side claiming their version is the accurate one.

As we explained in the history of pickleball, the game was invented by Joel Prichard, Barney McCallum, and a few other neighbors in the summer of 1965.  The two contradicting versions of the name origin story come from the Prichard family (boat story) and the McCallums (dog story). Joel Prichard’s daughter and a neighbor (Jim Brown) both picked out a Cockapoo puppy from a neighbor who was giving the puppies away for free. The Prichards named the dog “Pickles”.

The story has it that once they started playing the new racquet game (that would later be called pickleball) Pickles the dog got in the habit of picking up the plastic Wiffle ball in its mouth and running off the court with it.

According to the McCallum family (as well as the Browns – who were also some of the first pickleball players), the new sport was definitely named after the dog. They say they remember the exact night they named it after “Pickles” the dog while sitting in the living room of the Prichard cabin, they even remember cheering with excitement at the revelation of this funny name for their new game.

Several people from the early history of the game: including Barney McCullum, his son David, Dick Brown and his son Jim Brown have been interviewed and still swear by this story as seen and heard in this video:

The second take on the pickleball name origin is the “pickle boat” story.  According to the Prichard family, Joel’s wife Joan who in the past had been a competitive rower came up with the name Pickleball because it reminded her of a pickle boat.

She herself wrote this in the Parkersburg, West Virginia News and Sentinel newspaper:

I rowed crew in college and had never heard the term so seemed a little strange, but after a little research found that actually people do refer to weaker, mismatched crew boat teams as a “pickle boat”.

The next hole in the “dog story” is that both Joan Prichard and her daughter ​Peggy Pritchard-Olson have been quoted as saying that “Pickles” was not around until a few years after the game was invented…so the timeline really doesn’t match the McCallum family’s story in the video above.

Joan Prichard, again in the News and Sentinel, was quoted saying :

According to journalist Tristan Baurick in this article, Prichard’s daughter confirmed this in 2005: Because Joel Pritchard was a well-known politician (including six terms as U.S. Representative from Seattle and a two-term lieutenant governor of Washington) there is actually a recorded oral history of his life done by the Washington State Secretary of State Oral History Project.

The project is about his political life but does include other aspects including the early days of pickleball!  He is quoted in the oral history, also debunking the “Pickles the dog” story.

The widely spread notion that the game was named after Pickles, the Pritchard family dog, was debunked by Pritchard, who said the dog came later and “was named after the game” — although plenty of people advised him to stick to the other story because it “works better” (“Oral History,” 402).

Regardless of the “Pickles” story being rejected in interviews by 3 different members of the Prichard family, the “dog story” has persisted. It has been repeated in several major newspapers and seems to be the prevailing story on the internet and in pickleball circles.

Some people think that the “pickle boat” story just doesn’t sell like the cute puppy story and that a decision was made early on to make the dog the center of the sport’s history story rather than an obscure rowing term that very few people would identify with.

If nothing else, the contradicting stories make for interesting conversation regarding the early history of the sport.  Many people we talk to say that in the end it really doesn’t matter to them whether it was the dog or the boat they just love the sport and are happy with the somewhat goofy name. Other pickleballers are not so keen on the name and I do feel their pain. It’s sometimes hard to be taken seriously when you say you are going to play in a pickleball tournament.

While the sport has continued to grow as a fast clip (by some accounts it’s the fastest growing sport in the US), some pickleballers have told us that they feel the name itself may be a handicap preventing it from gaining more widespread acceptance as a serious competitive sport that requires skill – rather than a childish sounding game.

It is true that I’ve never heard people joke about or question the validity of any other racket sports: tennis, badminton & table tennis – are all taken seriously while pickleball , which borrows elements from each of those,  is sometimes ridiculed as a lesser sport.

In the oral history that we mentioned before, Joel Prichard is said to have once told a reporter that the name “Tenny Pong”​ was also considered as a possible name.  It’s hard to know if he said that jokingly or was serious…but I actually kind of like it especially since it references the sport’s roots. Either way, the name is now history and it’s unlikely it will ever be modified.

So,  whether you believe (or just prefer) the story of Pickles the dog or can appreciate the image of a hodgepodge of rowers in a crew boat that Joan Prichard eluded to, either way, we have the Prichards to thank for the name. We’re thankful to them as well as the other families on Bainbridge Island that had the creative idea to come up with a new sport that we’ve come to know as pickleball and we still love to play more than ever – now over 50 years later.

6 thoughts on “Why is it called pickleball? How did pickleball get its name?”