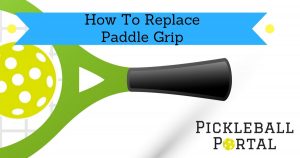 If you are here, you most likely know that many elements of pickleball came from tennis (as well as badminton and ping pong).  One of the questions we often get is how to correctly regrip a pickleball paddle and many people ask if 1) a tennis grip can be used to replace a pickleball grip and 2) is there any special technique that needs to be used to replace the grip on a paddle (or is it just like in tennis)?  Very short answer = Yes and No.

We’re going to talk about the necessary information you’ll need to properly replace pickleball paddle grip, among other things. We’ve tried to explain it clearly but for more visual people, it’s probably a lot easier to w​atch a video which we’ve linked below if you want to skip there–>>

Reference – differences and similarities between tennis and pickleball grips

The first most noticeable similarity between tennis and pickleball grips is that both of these come wrapped over your standard grip. Every tennis racket, and every pickleball paddle comes outfitted with the “factory” grip, and you’re free to use it if you’re satisfied with it, but many tennis veterans and pickleball experts advise adding another “layer” – an overgrip, so to speak.

Since people tinker with their tools in both sports, we’d say that another clear similarity is the “customizability” of rackets and paddles. Tweaking around with them usually brings additional tackiness and cushion, improving the stroke mechanics and reducing the chance of accidental slipping caused by excessive sweat buildup.

Now, there’s only one, but crucial difference between a standard tennis grip and the pickleball grip – the tennis handle is longer than a paddle handle so as to accommodate the larger surface of the racket’s head. Because of that, the replacement grips sold for tennis rackets can be used on a paddle BUT they’ll need to be trimmed to work on the shorter handle.  Usually, this “issue” is solved by just trimming the tennis racket grip down (with a scissors)  to the length  which will suit the pickleball paddle.

Tools for wrapping – what do you need?

For most scenarios you’ll just need a replacement grip (and/or overgrip tape if you are going that route) and a pair of scissors if the grip needs to be trimmed. Most modern grips are designed with self-adhesive tabs at the end to stick to the paddle as well as small length of tape to finish off the paddle grip at the top end.

If you’ve searched the web or watched any youtube videos on this, you may have seen some people pull out a pair of pliers or a narrow screwdriver in addition a pair of scissors and sometimes a staple gun add the finishing touch, but it’s not entirely necessary. In these cases where people are removing the factory grip they may need these extra tools to remove old staples and get down to the original bare paddle before building it up with a new grip (and overgrip if needed).

The grip tape is the only necessity, in essence, while you’re free to choose between pliers and the screwdriver to remove any staples or remnants of the old grip. In most cases a pair of scissors are the most efficient tool in removing the old grip tape.

Wrapping direction – where to begin?

First of all, you’ll want to remove the old grip tape and staple. Additionally, it’s recommended that you keep the handle clean from adhesive components, grip tape material, or any other materials that shouldn’t be beneath the new grip layer.

Now, one of the most common misconceptions about the wrapping direction is that some people claim that you should start from the top (finishing at the butt-end), while others advise otherwise. The best way to correctly replace pickleball paddle grip is to start from the bottom (butt-cap).

You should do this by removing the old grip and any tape backing, after which you should attach a taper end of your grip to the bottom of the grip. Most grips come with a removable tab at the end, pull that off to reveal the self-adhesive backing.  In rare cases, old grips may not have this sticky end, in which case you’d need a staple gun but this almost all grips I see now have the backing.

The direction of wrapping is pretty easy to figure out. Wrapping a right-hand paddle (paddles are all the same- but if you hold it in your right hand vs. left hand) should be done by attaching the grip tape to the butt-end while pulling it right-hand side (looking from the perspective where the paddle is upside-down. On the other hand, the left-hand paddles should be wrapped in the opposite direction – attaching the grip to the butt-end while pulling the grip tape left.

We’ve watched several videos online and think this one the best we’ve seen…they goof around for a few minutes at the beginning but overall it’s pretty clear and since Gamma Sports is probably the most well known maker of pickleball grips we figured they’re probably the most qualified to explain the correct way to put on a new grip.

How To Video: Wrapping Grip

Once you’ve determined the direction and removed the old grip tape, the process is quite plain and straightforward.

There’s one thing you should know above all – the stability of your paddle is crucial, so you should keep it against your hip (or thigh) while you wrap the new grip tape. Hold the grip tape using one hand while you rotate the paddle with your other hand slowly and gently. Unwrapping the backing is important if you wish to avoid curled grip which often ends up sticking right to itself.

After you’ve wrapped the grip all the way to the top and you have extra grip that needs to be trimmed you should use a pencil or marker to mark a straight line just slightly above the position where the handle ends.  Trim the excess grip using scissors.

The last step is securing the grip’s end using a finishing tape (should be included in the packaging of the grip- usually a few inches in length. If you want to ensure the same level of comfort you had with your previous grip, you should secure the finishing touch so that it’s as tight as your last one.

What’s the difference between a replacement grip and the “overgrip”?

Other replacement grips, however, offer increased “contour” feel (a great example is Gamma’s PB Contour Grip), which significantly boost the overall gripping power and maximize absorbency. Certain models like Gamma’s Pro Lite are there to provide higher traction and improve your ball control.

Overgrips are quite different, though. They’re supposed to go over your standard grip, providing additional attributes along the way. Most overgrips are used to further improve the comfort & cushion and/or to increase grip tackiness- like the Gamma Supreme Overgrip (the one the used in the video above).

If you’re still not sure which grip is best for you, click here to see detailed reviews of other top replacement grips and overgrips.

Essentially, you already know how to re-grip pickleball paddle – the process is much similar to replacing the grip on tennis racquets, and it all falls down to rolling some grip tape around the grip. Now, given that certain brands have taken an interest in improving how players feel, there are different forms and types of grip, and doing it the old-fashioned way just feels a little outdated.

We hope that we’ve been helpful with this little “how-to”, and we wish you a pleasant pickleball experience!

Pickleball is relatively young sport (1965) that picks up where tennis and other older racket sports left off. Essentially, it implements the basic concepts of tennis, badminton and table tennis shifting the rules and the equipment.  Now, even though some of the basic mechanics remain intact, pickleball brought a few innovations onboard. Namely, pickleball paddles are the weapons of choice you’ll be using during the game. The court is noticeably smaller and the equipment is different (see paddle vs tennis racket) and pickleball nets are approximately 2″ shorter than a tennis court net.