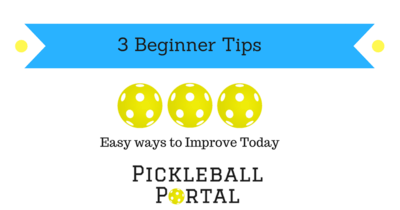 While talking to a pickleball coach at a local club recently, we asked what mistakes he sees most often while watching his beginner students.  It’s worth noting that these were all skills he had taught his students during private pickleball lessons.

The novice players would consistently execute these skills when prompted in a drill or guided lesson where he was giving them direct advice. However once they got in a game situation- be it a inter-club match or a local tournament – things would fall apart and it was if they had totally forgotten what they had learned.

Here are his top three tips:

1) Move up quick!  Too many newbie players stay back deep – even when their opponents aren’t pressuring them to stay back.  You have the advantage up at the NVZ so unless the other team is keeping you back at the baseline with long hard drive- you want to attack the net and get the upper hand.

Too many beginners hang back, and even worse start to come up and don’t commit- they hang out in “No Man’s Land” in the middle.  We’ve talked about this before – that’s the worst place to be.

So start moving to the kitchen -every chance you get! Stop hanging back at the baseline or in the middle of the court. Get on the same page as your partner and both move up to the net asap! Move in sync (don’t split up and leave one partner back).

It’s true that many of us are getting older and are slowing down due to injuries or mobility issues but even so the pickleball court is not that big. If you have the mindset that you need to approach the NVZ and don’t hesitate -you’ll give yourself a jump start and get there sooner as you practice this habit.  If one partner is slower, help the other by covering the middle as the slower player advances.

2) Don’t try to make the highlight reel: too many beginners love trying to hit a “winner”. While it is fun to hit that “fist-pumping”winning shot, trying to smash the ball past your opponents or hit a tricky shot – more often times than not ends in a unforced error rather than the intended winner.

Coach also sees a lot of players just trying to hit the ball too hard.  We’ve talked about this same concept when trying too hard to hit a winning serve: best way to improve your picklebell serve.

3) Drop Shot: Most beginners didn’t even attempt the Third Shot Drop. Coach had practiced this over and over in lessons, the students had done a variety of drills on the drop shot and could perform it pretty well while they weren’t under pressure.

However in real game situations he noticed the vast majority did not even attempt the third shot drop.  The beginners passed up almost every opportunity they had- even when presented with a perfect set up for a drop shot.

To be fair, the drop shot is a difficult shot, even many very advanced pickleball players will admit it’s one of the toughest shots for them to perfect, so it’s understandable that the new players struggle with it. But these were players that had a decent grasp on the shot and during practice had pretty consistently dropped it into the kitchen. So coach started asking “Why”?

Why were his beginners totally ignoring the drop shot completely?  Most common answer: FEAR!  Fear or messing up. Fear of losing the point and disappointing their partner. Fear of not clearing the net, committing an unforced error.

Coach’s advice: Start trying the “Third Shot Drop”! Yes, you’ll probably lose some points at first and no it won’t always land where you want it. But it’s a powerful shot and can be a very useful weapon but if you only use it in lessons and never try it in a real game situation – you’ll never get good at it. So the advice is to just start using it more-simple as that.

Having said that, that does NOT mean you should be using the drop shot on every third shot. I think the the third shot drop is widely overused. Too often we see new players trying to be sneaky with the drop shot and try to use it thinking it’s a “trick shot” when their opponents are deep. This may catch them off guard the first couple times but any decent player, even if they aren’t the fastest mobility-wise, will take advantage of your drop.

In general, you want to keep your opponents back as much as possible using long hard drives to keep them deep- but for times when the other team is already up the net you can buy yourself extra time to approach the NVZ by using the drop (because the drop shot takes an extra second or so longer than a hard drive – it gives you precious time needed to rush up to the kitchen line).

Here is a useful drill to practice:

We hope the info we passed on was helpful, let us know in the comments what you think. For beginners out there- what’s the hardest part of the game for you right now or what tip have you heard lately that helped you the most?