It’s an exciting time in the world of Pickleball, as the popularity of the sport continues to grow more and more kids are setting foot on the courts for the first time bringing a fresh new dynamic to the sport.

There have been some major developments in pickleball recently. In 2016 the USAPA launched the USAPA Juniors program, confirming the surge in participation among younger players.

The Juniors program was created to support pickleball players between the ages of 7 and 19 at all levels and help grow the sport among youth players.

The increased participation has also been great for parents.  As more kids are getting interested in the game they are joining their moms and dads on the court making pickleball a fun family activity and a great way for the entire family to keep active and stay in shape.

The next major milestone in 2017 was the product launch of the first kid’s pickleball paddle specifically designed for junior players under the age of 12.

The release of the Paddletek Ranger proves that major pickleball brands have taken notice of the rise in pickleball’s popularity among young athletes and are creating new paddles marketed specifically for kids to meet the demand.

Although this is the first junior pickleball paddle for kids, it’s not your only option.  There are other lightweight paddles (with small enough grips) that are good for kids. For parents buying their child’s first paddle, you may be asking…

What to look for in a good junior pickleball paddle?

#1) Weight: For smaller players, the key feature is weight. Junior paddles should be lightweight.  The Ranger mentioned above (and reviewed below) comes in under 7 oz with average paddle weight of only 6.5 to 6.9 oz!  This is the lightest paddle we’ve found on the market at the time of publishing but we’ve included several others that are light enough for kids.

Pickleball paddle makers list the average weight range (with min and max). Since paddles are so light and measured to the tenth of an ounce, companies don’t guarantee the exact weight of every paddle made but rather give a range for each model.  Although we’ve found other paddles with ranges that dip down below 7 ounces, the Ranger’s max weight is under 7.

#2) Grip Size: Smaller hands need a smaller paddle grip. On standard adult Pickleball paddles, grip sizes start at four inches.  4″ to 4⅛” is considered small which would be the best choice for kids under 12 . Older kids and teenagers may be ready to move up to a slightly larger grip size so we have also included some paddles with 4 ¼ inch grips.

Click here to see how to 2 quick and easy ways to measure grip size.

3) USAPA Approved: This is probably not a major concern for most kids, especially those under 12 since very few would be competing in sanctioned USAPA tournaments. However, as kids grow they may want to start getting more competitive and enjoy the challenge of playing in local pickleball tournaments and will need a paddle that’s USAPA approved.

If you are buying for a teenager who is likely to join competitive tournaments, it would be better to choose an approved paddle (rather than having to upgrade later if they decide to compete).

Based on those criteria we’ve come up with a list of the best light, USAPA approved paddles that also have a small grip size.

All the paddles below weigh right around 7 ounces and have small grips = 4 to 4 ¼”.

(Since publishing this article on junior paddles, we’ve come up with a separate list here for lightweight paddles with small grip size which adult players with smaller hands will find useful (many of our female readers had requested a list).

**Below, you’ll find our own detailed reviews or you can click the links above for more details on Amazon. 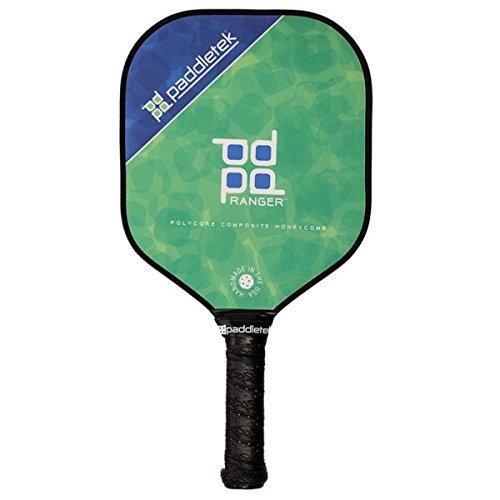 As we mentioned above, the Paddletek Ranger™ is a first in class paddle made specifically for children ages 12 and under. They do not make these anymore, but you may be able to find a used one or in stores like academy that have leftover inventory.   It has just a slightly smaller paddle profile than adult paddles. The measurements are: length 15.5”, Width 8”: Handle: 5” and grip circumference of 4″.

So really the paddle’s measurements are very close to a standard paddle, just adjusted to make it optimal for novice players under 12. The paddle weighs under 7 ounces making it easier for smaller arms to swing and less likely to cause fatigue or injury.

The paddle itself is anything but a kid’s toy.  The paddle is constructed with a sturdy honeycomb Poly-Core with durable vinyl paddle face. The 4″ grip is comfortable to grip with extra cushioning  (Paddletek’s Ultra Cushion Contour grip).

Like all of Paddletek paddles, the Ranger is made in the USA.  The Ranger comes with a one-year limited manufacturer’s warranty.

It’s great to see a leading pickleball paddle company such as Paddletek taking the lead and launching a junior paddle specifically for kids.

The arrival of the Ranger paddle really does confirm popularity Pickleball and proves that the sport is not “just for retirees” but is a vibrant and growing sport for all age groups.

(Just to clarify, Selkirk Sport does produce the “200P Mini Children’s paddle but this is a miniature toy paddle rather than an actual full-size paddle that juniors could learn to play pickleball with). 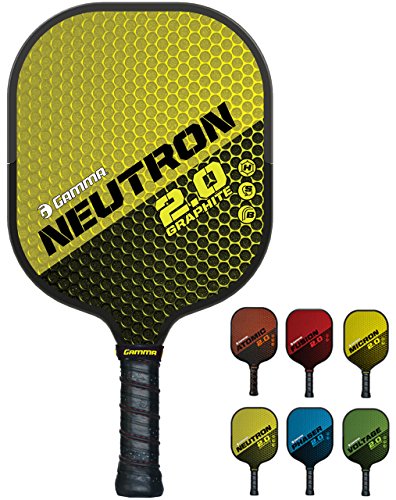 The Neutron 2.0 is the fastest and lightest paddle of the Gamma line, offering maximum speed and maneuverability. This is a HUGE benefit to kids starting out in pickleball, a quick paddle is going to make the game a lot more fun and less frustrating to learn compared to swinging around a heavy, slow paddle

This ultra-light paddles average 7 ounces, comes with a 4″ cushioned grip and is also USAPA approved.  The paddle has all the things we are looking for in a junior paddle making it our top pick.  We have a full review of the Gamma Neutron 2.0 here if you want to see more details.

The Elite Finesse by Pickle-ball Inc. is a very comparable paddle to the Gamma Neutron 2.0.  The average weight is almost identical with a range of 6.3 – 7.2 ounces, averaging right around 7 ounces.

The 4⅛” grip is still considered small but comes does have an extra ⅛” circumference which will be a consideration for younger kids with the smallest hands where the larger grip may it a little harder to grip comfortably.

The width and length of the Neutron 2.0 and Elite Finesse are almost identical. However, the Finesse has more of a teardrop shape compared to the more square boxy shape of the Gamma paddle. I think the Neutron’s shape gives an easier paddle surface to hit the ball with as they learn to play.

Apart from the minor difference in paddle shape and slightly larger grip, the other specifications are very similar.  They are both made with a Nomex honeycomb and graphite face.  The Gamma does have the textured graphite face which grabs the ball a little better.

The Gamma Neutron 2.0 only comes in yellow, the Elite Finesse is sold in tangerine and magenta. They are both very quick and easy paddles to maneuver.  The decision for me between these two comes down to preference on paddle shape and the grip size you need. 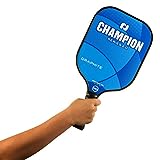 The Champion 2.0 paddle is also made by Pickleball Inc.  The company was founded by the co-inventors of Pickle-Ball in 1972.

Versions of the “Champion” paddle have been around for over twenty years so there is a long and reputable history behind this paddle and the company that makes it. This “Series 2.0” has a paddle range of 6.8-7.8 oz with an average paddle weight of 7.4 ounces.

This is an ideal weight range for most players including beginners although it a notch up on the scale from the previously reviewed paddles it is still definitely a lightweight paddle that is easy to swing including for younger players.

Click here to see our full review of the Champion Paddle.

It comes with the same 4 ⅛” grip size as the Finesse. The core is made of 3/8″ Nomex Honeycomb and the graphite paddle face is covered in with a vinyl decal with four available color choices: Fire Red, Solar Orange, Atlas Blue & Aurora Green.

The shiny vinyl paddle surface grabs the ball less than a paddle with texture, like the Gamma Neutron, which would be a negative mark against the paddle for any players trying to learn to put extra spin on their pickleball shots.

For beginners, pickleball spin usually is a minor part (or non-existent) of their game so this would be a minor strike against a kid’s beginner paddle.

The Champion 2.0 is good entry level paddle for a junior player and normally sells at an affordable price (the MSRP on this paddle is lower than other paddles on the list).

Engage Pickleball has taken their most popular “Encore” paddle and redesigned a new lighter version called the Engage Encore LITE.

This new rendition of the original Encore offers the same balance of speed and control but at a mere 6.9 ounces average (ranges from 6.7 – 7.2 ounces)

This composite paddle features a polymer honeycomb. Polymer cores are known to be quieter pop still gives the ball plenty of “pop” off the fiberglass paddle face.

One downside on the LITE is the grip size measures at 4 ¼” which is considered a “medium grip” and may be pushing the limit on grip circumference for younger player although may be a comfortable grip for teens playing junior pickleball.

As we mentioned above there are more accurate ways to measure grip but the most simple is by height.  This 4 ¼” grip should be correct for most players 5’3″ to 5’8″ tall.

The Encore LITE is available in the following colors: white paddle with either red, purple,  pink, or blue logo; pink swirl or purple swirl; blue fade or red fade. 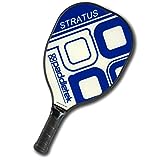 Although Paddletek was only founded in 2011, it has grown to become one of the largest US manufacturers of Pickleball paddles. They make all of their paddles in the USA and it’s the only company to offer a 5 year “no dead spot” guarantee.

The tapered shape (similar to a tear-drop) on the Paddletek Stratus makes for a fast playing, light paddle with good action and control.  The head-weighted design transfers the paddle’s sweet spot toward the top end of the paddle to provide increased power without sacrificing control.

ProPolyCore™ technology reduces vibration which is a welcomed feature to anyone suffering from tennis elbow.

The one negative point about this paddle (when considering it as a youth paddle) is the grip size is also 4 ¼” just like the last paddle reviewed.  But as mentioned, if your little pickleball player is at least  5’3″ tall…or taller,  the Paddletek Stratus would be a good fit for a light, USAPA approved paddle.

This would also be a good paddle if you are interested in the Paddletek Ranger but your child had outgrown the 4″ grip on that paddle or are looking for a similar, lightweight paddle that is approved for tournaments (the Ranger is NOT).

In addition to the “no dead spot” guarantee, the company offers a limited Lifetime manufacturer’s warranty.

Manta World Sport is a Canadian company that has been producing racquet sports equipment since 1972 and has been making pickleball paddles since 2011.

The paddle core is made of an aluminum honeycomb and the paddle face is covered in a carbon/graphite skin.  Although the paddle is slightly wider, new players will most likely not really appreciate the extra ⅛” and it weighs an average of 7 ounces heavier than the lightest paddles on our list.  If you are looking for the extra surface of a wider body paddle then this may the pick for you.

The paddle is made in Canada and is approved by the USAPA for tournament play.

For anyone doubting the idea of kids playing competitive pickleball, check out this video.

These juniors can play….coming to a tournament or court near you soon-Look Out!