It’s one of the never-ending debates in the search for good pickleball gear. Should you buy a pickleball paddle for control or one designed for power?

We hear it all the time on the courts and regularly get asked by our readers if we have any recommendations for good control paddles.

We go into much more detail below, but for those of you looking for a quick tip, we’d start by looking at the new Sensa Poly Core paddles by Gamma and the new AMPED paddles by Selkirk. Both of these lines are specifically designed for control and each has a variety of paddle shapes and styles for almost any player. See our full review of the AMPED paddles and a buyers guide to help you decide which one would be best for you.

So, we decided to tackle the question and give you some feedback and updates on how the paddle industry has changed as well as some picks that will give you more control without having to totally sacrifice your power.

Over the years there have been those that split paddles into control vs. power and it was generally thought that to get one of these you really had to sacrifice the other. Much of this concept came from the weight of the paddle and the paddle hitting surface.

The stereotype was that heavier paddles (usually composite) gave you the power boost you needed for strong serves, deep shots from the baseline and winning overhead smashes, while the thought was that to get control at the net for your slower soft dinking came and finesse shots you really needed a lightweight paddle, usually with a graphite face.

It’s a logical explanation since the lighter paddles are easier to maneuver while the weight of the heavier paddles give you the added power behind your shots, however the introduction of new core materials has narrowed the gap between clearly defined power and control paddles and some of these new paddles offer a more balanced blend of the two.

The other main differentiator is the core: traditionally these have been broken down into three categories: aluminum, Nomex™ or Poly.  Nomex is the known for power – they are the hardest and loudest paddles and gives the most “pop” whereas aluminum and Poly are softer, tend to dampen the shot taking off some of the power -these are known for control.

Well, times have changed and paddle technology has advanced. The old question of light vs. heavy, composite vs. graphite vs. aluminum vs. Nomex have been blurred.  While still relevant criteria when comparing paddles, these are no longer the only criteria to look at when shopping for a new pickleball paddle. There are definitely many more options, some of which were not even available just a few years ago.

Over the decades there have been many milestones in the trajectory of the modern pickleball paddle. Looking back to 1983 and the introduction of the first composite paddle by it’s now clear that that was a major shift in the industry that opened the way for a flood of new paddles using similar materials

In just the past few years, we’ve seen new paddle cores introduced by some of the major pickleball brands that go beyond the three well known cores  (aluminum, Poly and Nomex).  Here are some of the newest cores on the market:

This new core material was introduced by Gamma Sports in early 2018 and is specifically designed to enhance the touch on the ball. As per Gamma, the Sensa Poly Core helps to dampen vibration which allows you to hold the paddle steady. The touch and feel that the core gives to the new paddle also make it easier to maintain control when hitting shots at off angles, like when you hit a dink shot cross court at a sharp angle.

The core is designed to make it easier to hold the paddle steady and ensure the stability needed for control shots that are critical during the slow dinking phase of the came and finesse shots that require precise placement.

Gamma Sports has used the “Sensa” core in five of their new paddles, including the elongated Gamma Sports Pin and Needle paddles. It’s also been included on the new reiteration of the classic Razor, the newly renamed and redesigned RZR paddle as well as their new Mirage Paddle and Twister paddles. You can see all of these new Sensa Core paddles here if you want to check prices or read reviews.

Selkirk caused quite a buzz in the pickleball community in late 2017 when it introduced a whole new line of AMPED paddles (think Amplified as in amplified power and control).

Then in early 2018 Selkirk released a lighter weight version of the each of their AMPED paddles, for players looking for the same control that theX5 core offers but in a lighter version. This new paddle core has also been pair with the company’s  FiberFlex Face which gives more control and accuracy on precision shots.

Since then, these paddles are getting  a lot of attention and have been well received in the pickleball community.

One of the frequent comments we hear is that Selkirk really has found a way to balance power and control, which was the whole goal of this new line.  The X5 core itself is is a novel material (patent pending), it’s more cushioned core that helps softens the contact and lets the ball linger longer on the paddle face. At the same time, it’s thicker and gives a boost of power when needed. 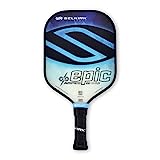 The new X5 core has been used in a wide range of Selkirk’s paddles including standard, wide body and elongated models: Selkirk Epic, Maxima, S2 & Omni.

With the new addition of a lightweight version of each model, there are now over 30 versions of these paddles with color combinations, weights and shapes for almost every player regardless of  level or playing style.

You can see all of the new Selkirk AMPED models here if you’d like to check prices and/or read customer reviews.

Apart from the new advances in core technology, the other main factor when it comes to control is the hitting surface. Special texturized surfaces used on new paddles can add the extra bite needed to apply spin to your shots and the slight roughness of the face “grabs” the ball and keeps it in contact with the surface slightly longer than a glossy polished graphite pickelball paddle.  While this is a split second and almost impossible to notice from afar,  the feel is noticeable to players using the paddle.

That extra bit of connection with the ball allows you to do more with your shots, especially when you are playing the slower game, trying to put some action on it or cutting it at a sharp angle (for example a cross court dink).

Traditionally this kind of touch and feel was limited to composite paddles since the fibers give it that slightly rough feel.  The texture similar to the finest grain sandpaper, enough to feel it when you run your fingers over the paddle…and enough to hear it if you scratch your nails across it.

However, with the introduction of new materials and construction techniques there are more options.

One of the most notable is the introduction of “liquid Graphite” by EngagePickleball.

The company coins this term to refer to their  ‘chemically bonded’ skin that they use on the Elite Pro paddle.

Engage also included the material on their Encore X-Series, which apart from the skin has the added benefit of their new Advanced Polymer Core (with Vibration Control Technology). This combination of the new core specifically designed for enhanced control and new skin on the hitting surface makes the Encore X one of the top picks to look at for a good control paddle.

Engage also recently came out with the new Poach Advantage paddle Control Pro ‘Black’ Technology.  The texture on this paddle is also new and runs vertically on the paddle and at the top of the limit the USAPA allows for surface roughness.  They are calling their new “Variable Release Technology”, the concept is basically that the paddle will surface will “hold the ball” longer on the face and responds well by giving you control on both slow and hard shots.

If you are looking for a control paddle, Engage is definitely a company to consider.

Another textured paddle face worth looking at is the SPINtac™ by ProLite. These fiberglass panels are layered on top of Prolite’s QuadCore™ Power Polymer honeycomb core.  The textured surface makes it a good option for players looking for control. The technology is used in the Prolite Crush which landed it as one of our top picks on our list of best paddles for spin.

While there is no conclusive answer to the absolute best paddle for control, hopefully this overview of the recent changes in the industry and the introduction of the new cores and hitting surfaces gave you some starting points to look for your next paddle. The industry has definitely come a long way in recent years and it’s a great time to be playing pickleball whether you’re just getting started or a veteran player upgrading your gear…there are many more choices on the market, many of which will help you play a more controlled game compared to the clunky old wooden paddles we limited to just a few decades ago.