Although Franklin Sports is a relative newcomer at making pickleball paddles, the company is a well-known sporting goods manufacturer Franklin has been making sports equipment since 1946 for a wide range of sports.

I remember seeing the Franklin logo as far back as the kickball on the grade school playground.   They sell stuff for a huge variety of different sports and recently entered the pickleball market with the launch of their  “Pickleball-X brand paddles”.

The Pickleball-X brand by Franklin Sports has since expanded to include several new pickleball paddles, as well and other accessories like their glove designed for pickleball (similar to a batting glove but open fingers) as well as sling bags and backpacks specifically designed to carry your pickleball gear.

While Franklin started out with some very basic beginner paddles like the wooden Pickleball-X Volt paddle, they moved on to an aluminum core “Challenger” and their edgeless USAPA approved aluminum core “Python” paddle and their carbon fiber Viper (which is also edgeless).

Since then the company has continued to launch several other more advanced paddles geared toward intermediate players including their foam-based core paddle: the Franklin X-Charge and fiberglass-faced “Vibe“.

In 2017, Franklin also launched their own pickleball ball- the 40-holed outdoor ball call the X-40. While the reception of this new ball has been somewhat lukewarm, with many players questioning its durability. Although the one-piece design does seem promising (although they may need to tweak the design a bit).

However, the launch of several new paddles, bags, accessories, and now their own pickleball shows that Franklin Sports and their Pickleball-X product line are definitely betting on the future of this growing sport and continue to be a more prominent player- their logo is being seen at many local and national tournaments and their gear is showing up on more local courts side by side with some of the more established pickleball brands.

Here are some of Franklin’s most popular Pickleball-X paddles along with a more detailed review of each:

Since winning a gold medal in Men’s Pro Singles at the US Open and gold in Men’s Singles 19+ at the USAPA National Championships among others he has continued to dominate on the court and as of 2021 was ranked the #1 Men’s player in Doubles, Singles, and Mixed Doubles!

In 2019 Johns signed an endorsement deal with Franklin and plays with a paddle that is aptly named: the Ben Johns Signature Paddle.

The 7. 5 – 8 OZ paddle with a longer 5.6″ handle makes it a good match for former tennis players (like the paddle’s namesake) and the max grit textured surface gives it a good amount of bite on the ball for effect and spin.

The Charge is one of Franklin’s most recent paddles (along with the Vibe, both of which were released in February 2018). We mentioned these paddles, along with all other new pickleball paddles on the market from all major brands here (we update that page every time new paddles are launched.

The Charge Paddle by Franklin is made using some of the most technologically advanced materials currently available (normally used in the airline industry).

The unique thing about this new paddle is that the core is made s polymethacrylimide (PMI), a lightweight foam material.  The paddle is finished with a fiberglass face. As a brand new paddle, time will tell how this new foam core works out and if it’s worth the extra cost compared to other paddles from this brand.

The Vibe paddle features a polypropylene honeycomb core and a fiberglass face. The paddle is a mid-range paddle in the Franklin product line. The paddle weighs in at just 7 and a half ounces and has a nice balanced feel which is a good match for a beginner or intermediate paddle.  It’s someone similar in size and shape to an earlier paddle by Franklin- the Pickleball-X Caliber.

The main difference being the former paddle weighed about half an ounce more (8.0 ounces) and featured a Nomex core.  The new vibe paddle was launched at a more affordable price point than a Caliber.

The Caliber paddle weighs in right at 8 ounces. While slightly heavier than the previously reviewed paddle, it’s still a very manageable and balanced weight.  The 5″ long handle and ergonomic leather grip give the paddle a solid feel.

Under the fiberglass face is an internal Nomex honeycomb core. The interesting feature of the Caliber is that the face has 2 layers of fiberglass on each side of the paddle face.

The double fiberglass hitting surface gives the paddle a solid finish and a good feel.

The Caliber does have a traditional rubber edge guard around the outer perimeter of the paddle face, protecting it from wear and tear and extending the lifespan.

The large sweet spot will be a welcomed feature for players. Competitive players will be pleased to hear that this Franklin paddle is approved for USAPA tournament play and those living in gated communities will be happy that this paddle qualifies as a quiet zone paddle -less noisy than other paddles on the market.

The Viper is another paddle offered by Pickleball-X. We have a full review of the Viper here in our shortlist of the top edgeless pickleball paddles on the market.

If you are not familiar with this category of paddles (they do not have a traditional edge guard to protect the rim) we recommend you read that first before making a buying decision to see if this paddle is right for you or not.

If you considering the Viper paddle, are not quite sure, and want to compare it to a close competitor, the Amazin’ Aces ‘Bainbridge’ Pickleball Paddle would be the closest. They are very similarly priced, shape and design. The specs are very similar with the Viper coming in just a few tenths of an ounce lighter and a slightly shorter handle length (1/4 inch). They are so similar they may be hard to compare just from the photos so the reviews from previous buyers may tip the scales.

Franklin also just recently launched this Pickleball Retrieval Tube in 2018 that is specifically designed for our beloved sport.

Check out this article if you are looking for “Pickler-Uppers”, ball tubes, and other products designed to help you pick up balls (without breaking your back) as well as some DIY projects to make your own to save some money.

These gadgets can be especially useful if you practice with a pickleball ball throwing machine (click here to see our detailed comparison and reviews of the top-selling models on the market).

Franklin Sports also makes specific pickleball accessories such as their wristbands and headbands. 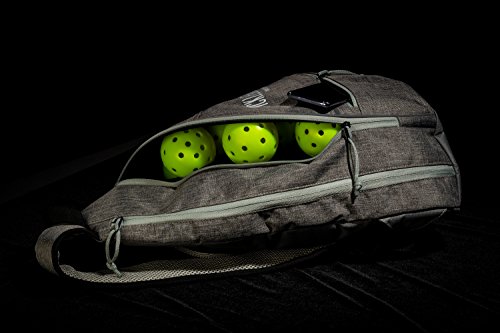 They also make a sling bag for pickleball which we’ve reviewed here in our article on top pickleball bags and have recently added a backpack to their product line.

It is Franklin’s first attempt at a ball so we should give them time to work the kinks out of their production process.

There are other brands that have been making balls for decades so it’s understandable that the first reiteration may not be the best and they are working on quality (the main complaints so far from players have been that some of the X-40 balls crack prematurely).

Having such a well-known sports brand like Franklin move into pickleball and create their own brand (Pickleball-X) is a good sign for the sport, the increased demand as the sport grows shows that companies are paying attention and want to get into the action.

So far Pickleball-X paddles have been overall well-received, especially by new players trying out the sport and beginner and intermediate players looking for affordable entry-level paddles.

We look forward to seeing what other products the brand launches in the future.