Although it’s a young company, Paddletek pickleball paddles have quickly become known as some of the best paddles on the market and can often be seen in the hands of pro players at major tournaments and on pickleball courts around the country (and abroad).

All of their paddles are made in the USA, offer a Lifetime Manufacturer’s Limited Warranty (against defects), and currently is the only company to provide a 5 year “no dead spot” guarantee.

In 2017 they made news by launching a new paddle designed for junior players, the Ranger- a first in class.

Click here to see our updated page with all the new pickleball paddles that have recently been launched by all major brands, including Paddletek.

Some of the most popular Paddletek paddles are the: Phoenix Pro, Element, and the Bantam EX-L. The company is one of a handful of pickleball brands pushing paddle technology forward and putting out some of the latest and greatest paddles.

By far, the most talked-about paddle is the Tempest Wave which we reviewed in detail below.

In 2018, Paddletek announced a partnership with a well-known tennis brand Prince. These paddles are being made in the USA by Paddletek to the same standards they make their own paddles. The main characteristic of the new line is the unique round shape- very similar to an oversized tennis racket. If you are a cross-over player coming from tennis or just like the idea of a rounded paddle with large sweet-spot, you can check out our overview of Prince Pickleball Paddles here.

This paddle made “waves” in the industry when it was released and landed it at the top of many players’ wish list. Many consider this a pro-level paddle.

Not only can it be seen in the hands of several renowned professional pickleball players (including Daniel Moore, Dave Weinbach, and Aspen Kern, all gold medal winners at national tournaments).

The Tempest Wave weighs just under 8 oz with paddles averaging 7.5 to 7.9 oz and features Paddletek’s own Advanced ProPolyCore™ paddle technology to dampen vibration. The paddle is also designed as a quiet paddle to be used in “green zone” communities where noise levels are restricted.

The paddle has a 4.25 grip circumference and has plenty of playing surface with a traditional paddle body shape of 16”x 8” and 5″ handle.

The Tempest Wave has become a very popular paddle, so much so that it’s often out of stock.  Click here to check price and availability.

The Bantam EX-L is marketed by Paddletek as an ideal paddle for intermediate to advanced players looking for power.

This medium weight paddle is slightly heavier than average with a weight range of 7.8 to 8.3 oz. which gives it a nice boost of power.

The ProPolyCore2™ helps reduce vibration and its textured paddle face helps make it easier for you to put more spin on your shots.

The “velvet” poly surface on the Bantam earned it a mention on our recent article on best paddles for spin.

It’s interesting to note that in an interview, pro player Daniel Moore (mentioned above in the Tempest Wave review), that while he uses that paddle for doubles play, he switches to the Bantam EXL paddle for singles due to the need for more power and speed.

Anyone playing singles will want to take a look at the Bantam EX-L if you’re feeling like you’re lacking power in your singles game.

The Bantam TS-5 is a lighter-weight version of the previously mentioned Bantam EX-L.

The TS-5 weighs 7.2 to 7.5 oz but offers the same paddle technology and features as its bigger sibling.

Really it comes down to the weight on this one. If you are looking for a really lightweight paddle with the same features of the bigger Bantam EX, then the TS-5 would be the choice for you.

The Element paddle continues to be one of best selling in Paddletek’s lineup. We regularly see a lot of intermediate players with this paddle on the courts as well as local tournaments.

The light to mid-weight of this paddle, the traditional standard shape, and all-around balanced feel tends to appeal to all-around players looking for a quality paddle without breaking the bank.

The average 7 and a half ounces makes it a nice weight- giving you agility at the net without sacrificing too much power.

The cushioned grip comes in 4.25 circumference which is a small enough that appeals to most average hand sizes while players with a larger grip could, of course, build that up with a few layers of overwrap.

The Element comes in Blue, Raspberry, Red and Yellow.

The Helo is the original elongated paddle by Paddletek (see newer Horizon below along with a comparison of the two).

The Horizon is an elongated (also called “blade”, long or long-board) paddle. This paddle measures  17″ long – which is the maximum length permitted by the USAPA.

A lot of players like these longer paddles, especially those that play singles. The longer paddle shape helps you reach more shots as it increases your reach and covers more area – which is key during singles play.

Some of the disadvantages are that these longer paddles have a narrower sweet spot so they can be challenging for inexperienced players, especially if transitioning from a wide-body paddle.

It also may take some time to get used to the feel, even those these paddles have gotten lighter- (the Horizon only weighs 7.2 to 7.4 oz) but since they are longer they can “feel” heavier.

Because the paddles look very similar, people often ask what’s the main difference between these. If you are trying to decide between these two elongated paddles, here are a few points to consider:

If you are planning to buy an elongated paddle, check out our other top picks here to compare before you buy. 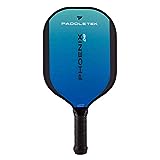 The Phoenix LTE, introduced in 2017 is the new kid in the Paddletek family, along with the Horizon paddle that was also launched the same year.

The LTE is a lightweight paddle coming in just at 7 ounces (ranging from 7.0-7.3) with a larger 4.5 grip circumference.  The paddle face features a poly composite surface that adds enough roughness to help your spin game.

At the time of publishing this article, this was the lowest priced Paddletek paddle that is approved for USAPA tournament play.

The Phoenix Pro meets all USAPA guidelines and is fit for noise restricted neighborhoods. Adding a list of features this paddle includes the Advanced Pro Poly Core that we’ve talked about early- the Paddletek core specifically designed to reduce vibrations.

If you’re looking for a balanced paddle that offers both control and power, this paddle is worth a close look.  It’s heavier than many of the other paddles by Paddletek right around 8 and a half ounces it packs some punch (paddles range from 8.4 to 8.85 oz).

The paddle is designed for balance and control with its perimeter weighting (compared to head weighted paddles).

Who is the paddle for based on its small grip (4 ¼”), large paddle face with velvet textured surface and balanced weight,  I’d say this paddle is a good fit for someone looking for overall balance, large hitting surface and enough paddle texture for improved spin.

See what customers say who recently bought the Phoenix Pro.

The Power Play Pro features head-weighting to increased power. The tapered head paired with the high sweet spot (due to head weight) makes this an attractive paddle for players looking to add power to their serve and long drives from the baseline.

The paddle face is finished with a textured surface to help you put spin on your serve/shots.

Who is this paddle for:  this paddle would be a good option for anyone looking to add power without going too heavy (7.9 to 8.2 oz) who also wants the added benefit of a textured composite hitting surface.

The playing surface gives you that the extra touch and spin to balance out your power game with some added control.

The paddle face comes in black for those looking for a subtle looking stealth weapon…as well as 8 very vibrant colors to match your personal taste.

If you’re looking for a lightweight paddle with a small grip size, the Stratus paddle is worth taking a closer look. The paddle is head-weighted which moves the sweet spot closer to the top of the paddle and gives your drive extra power.

As mentioned, the Stratus features Paddletek’s own ProPolyCore™ vibration-reducing technology which is a welcomed feature for any player but especially those that suffer from tennis or “pickleball” elbow.

The Stratus is USAPA approved for tournament play, that along with its small grip size and weight class landed it on our shortlist of best paddles for juniors (or anyone with small grip size or stature, looking for a small, light paddle).

We’ve mentioned the Ranger paddle a few times in the past since it made big news in the pickleball industry as the first junior paddle specifically designed for younger players.  With the recently created USAPA Juniors which is dedicated to growing the sport among teenagers and younger players.

This step by Paddletek is a major vote of confidence in the future of the sport and proof that interest is growing beyond the stereotypical view of pickleball as a sport limited to seniors and retirement communities.

The Ranger Paddle is specifically designed for younger players with a smaller 4″ grip and super lightweight under 7 ounces (paddle averages 6.5 – 6.9 oz).

Although in the past we have seen kiddie paddles sold as novelty items for adult pickleballers to give to their kids, the Ranger is anything but a toy.

While the paddle is designed for kids, it’s finished with the same materials and tech you’d expect from a quality adult paddle, just in a smaller format. The paddle is built on a Honeycomb Poly core and finished with a vinyl paddle face and comfortable cushioned contour grip.

Paddletek makes the paddle in the USA and offers a one-year limited warranty.

The one pitfall to the Ranger is that it is NOT approved by the USAPA for tourney play.

So if your young player has hopes of competing (it’s great to see how more young players are showing up to local tournaments – and often taking home medals!) you’ll want to look at our list of approved paddles that are good fit for smaller players (list is specific to lighter paddles with smaller grip).

The Paddletek Stratus (reviewed above) also made it on that list so is a good option for young players that want to compete (or adults with small hands).

Although Paddletek is mostly dedicated to paddles, they have also partnered with Pure Pickleball to create the  (Currently unavailable)

What makes the P7 unique is its 32 hole design, most outdoor balls have 40 holes (indoor usually 26). The P7 balls are made in the USA and many players prefer the ball’s quick action and find it has a similar feel as another well-known ball- the popular “Top” ball.

Click here to see our complete Pickleball Ball Buyers’ Guide where we explain the differences between indoor and outdoor balls and give some top picks in each category.

Paddletek was founded in 2011 by Cody Smith in Scottsdale, AZ.

The project began more as a hobby but about 6 months later he was joined by his brother Curtis Smith and they began to grow it as a serious business.

In the 6 years since their humble beginnings, Paddletek has gone from selling a dozen or so paddles to becoming one of the leading manufacturers in the industry.

The company has since relocated to Niles, MI and as of 2020 had 12 employees (known jokingly as “chimps” when first hired as they learn the process of putting the paddles together, later graduating to “Paddletek-nitions“).

All of the company’s paddles are made in the USA.