No matter which way you look at it, pickleball is growing like crazy! Part of what makes this sport so popular is the migration of tennis players to pickleball, and many of those idle courts around the US are being converted over.

There are several ways to rank popularity. You could look at the total number of active players, total places to play (number of pickleball courts), or other metrics, but this list below looks at the court density per capita measured as the total number of courts for every 10,000 residents in the city. While some of these cities were expected since they are known hubs for pickleball, there were a few states that showed up a few times in the top 10 that took me by surprise.

For example, I wouldn’t have guessed the Nebraska or Virginia has so many courts – they are not mentioned often compared to Florida, which some people refer to as the “pickleball capital”.

No matter how you slice the numbers, pickleball is booming. If you are looking for places to play click here: places2play.org

Top US Cities for Pickleball (Court Density by Population)

This list is based on statistics from 2018 gathered by The Trust for Public Land. To see the updated list scroll down to the embedded graph based on the latest survey. 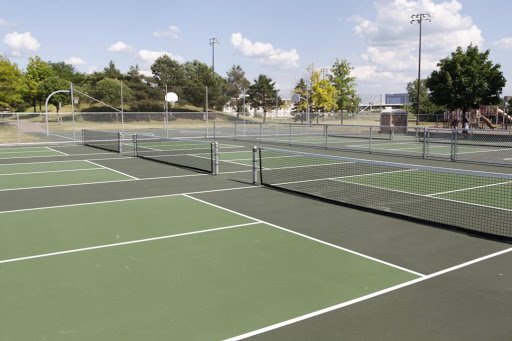 The first city on the list is not a huge surprise for anyone that knows the origins of pickleball as the sport was invented on Bainbridge Island, just off the coast, and connected to Seattle by ferry.  And in the Seattle–Tacoma metropolitan area, including Kent, WA, you’ll also find the home or Pickbleball Inc. and Pickleball Station, one of the many places to play indoor pickleball.

MN is known for its snowy winters, so it’s common sense that indoor pickleball is popular here. But if you’ve been to the Twin Cities you know there are a ton of parks, and a LOT of tennis courts and summer is a great time to play here. Just bike around the city lakes, and you’ll see a lot of (mostly empty) tennis courts. Many of those are prime for converting to pickleball.

There has also been a flurry of new courts added in the surrounding suburbs such as Eden Prairie, Bloomington, and Minnetonka. Woodbury Pickleball Club plays at Shawnee Park.

Madison Friends of Pickleball has recently grown to be the Capital Area Pickleball Association, to promote the sport in the greater Madison area (Dane County). Garner Park is the home of Madison’s dedicated pickleball courts in addition to a number of tennis courts lined for pickleball throughout the city with over 20 places to play in the Madison area listed.

Pickleball has been written up in the local press and some dubbing nearby Williamsburg, Virginia as “Pickleburg”, the area has seen a huge growth in courts and participation with places2play listing 15 locations in Virginia Beach alone.

The City of Omaha Parks and Recreation has a dedicated pickleball page, the local community has an active Facebook page and local tournaments it’s a thriving place to play pickleball.

With the local Cornhusker State Games and State Games of America, Lincoln makes another Nebraska entry on the list.  Check out all the places to play in Nebraska as per the USAPA.

High Point Park Tennis Center, Bear Creek Park, and Watauga Community Center are listed on yelp as some of the best places to play, and three courts on a newly surfaced gym court Trietsch Memorial United Methodist Church in nearby Flower Mound, TX offer locals there another opportunity to play indoors.

Can you think of a more beautiful place to hang out in the sun with an ocean breeze and play your favorite sport? Luckily for locals, pickleball is thriving in Honolulu an on the island of O’ahu in general. Heading to the islands for vacation, check out Hawaii-Pickleball-Oahu on Facebook to connect to play with locals and check out the list of places to play in Hawaii here.

Here’s the embedded graph from for most current data.